Also located on the Pavel Dimitrievici Kiseleff road, but far from the Antipa Museum, more precisely in Herastrau Park, the Village Museum is considered one of the main tourist attractions in Bucharest, being praised mostly by foreign tourists traveling to Romania. Streching over an impressive area, the museum has the size of a true village and includes a lot of monuments and artifacts from the 17th century to the 20th century. Here you will find, in fact, houses and rural buildings representative of each ethnographic area of the country, including from Transylvania, Maramures, Oltenia, Moldova, Dobrogea, Muntenia and Banat.

Let's go back to the past and see how this museum was born. In 1867, during the World's Fair from Paris, Alexandru Odobescu, a man of culture, proposed the presentation of some monuments of popular architecture. After few years, in 1909, the scientist Alexandru Tzigara Samurcas exposed inside the Ethnographic, National Art, Decorative Art and Industrial Art Museum in Bucharest one peasant house from Gorj County. This approach would precede the permanent exhibitions of the authentic and complete households from all the most important regions inhabited by Romanians. The most important fact is that at that time there were only two open-air museums in the world: Skansen Museum in Stockholm, Sweden (1891) and Bygdoy Museum in Lillehamer, Norvegia.

The National Museum of the Village Virtual Tour

In Romania there were open to the public Ethnographic Museum of Transylvania in Cluj (1929) and the Romanian Village Museum in Bucharest (1936), the current National Museum of the Village "Dimitrie Gusti". Dimitrie Gusti, professor and founder of the Sociological School in Bucharest, organized monographic research campaigns in a relatively large number of Romanian villages. Together with his team of students, sociologists, ethnographers, folklorists, doctors and many others, after 10 years of research (1925-1935), and with the moral and material support of the Royal Foundation "Prince Carol", he laid the foundations of this exceptional monographic work.

The mission of this museum was to present to visitors the real life of the village, as it was lived by the Romanian peasants. That's why, from time to time, the former homeowners of the houses, were brought to live into the museum houses, being let to bring with them their farm birds and animals.
This was not the first time when the houses from the Village Museum were inhabited. In 1940, following the embedding of Basarabia, of one part of Bucovina and Herta Region into the Soviet Union, the Bucharest Municipality decided that some of the museum houses should host the families of the refugees from Bucovina and Basarabia. These families lived in the museum until1948, which stopped the museum's activity.
In 1948, the Village Museum Dimitrie Gusti was reopened to the public under the leadership of Gheorghe Focsa, a former student of Dimitrie Gusti. He decided to evacuate all the families who lived in the museum in order to stop the degradation of the patrimony. Starting with this decision, the museum began to record huge realizations: the surface intended for the presentation of the monuments was extended, the collections were diversified, new households were acquired, cultural periodicals were published, temporary exhibitions, shows and folk festivals were organized and so on.

Today, the permanent exhibition includes 123 distinct settlements, 363 monuments and the movable patrimony totals over 50.000 objects. Below you can enjoy a small virtual tour of the National Museum of the Village "Dimitrie Gusti". We recommend you to make a reservation as soon as possible for your next visit in Bucharest!

During your tour inside the Village Museum Dimitrie Gusti you will see a lot of traditional settlements, one older than the other, one more beautiful than the other, one more unique than the other.
Look at the house below! Mastacăn House was built in the early 19th century. It is typical for a dwelling with an unheated porch and living room. The house is amazing due to its low proportions and small windows. The low porch on three sides without pillars and with wide eaves contributes to the charm of the house. The interior is adorned with carpets and towels, dish shelves and pegs, high piles of fabrics, vests and coats. The main occupations in the area were shepherding, pomiculture, fishing and timber rafting on the Bistrita River.

We mentioned before that one of the main occupations in the area was timber rafting on the Bistrita River. Here you can see how a temporarily inhabited house looks like. It is a single-celled type construction, built on a stone foundation, with an open porch on two sides, walls of round spruce beams joined in saddle notch. The interior is simple designed and consists of perimetric benches and a small table, with rugs and towels arranged on the walls. It is worth noting is the summer kitchen that you can see behind the main house. 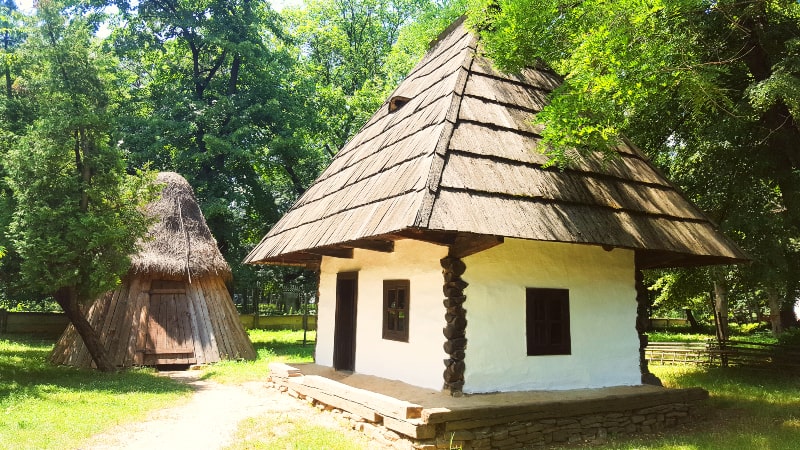 Stănești house is one of the specific examples of architecture with two tires from the area. The house was built in the XIXth century on a high stone pedestal. The walls are carved with wood, plastered with clay mortar and painted. On the upper floor there is a porch, the entrance with open hearth and chimney and two rooms, the living rooms and the room for the guests. On the lower level there is the cellar. 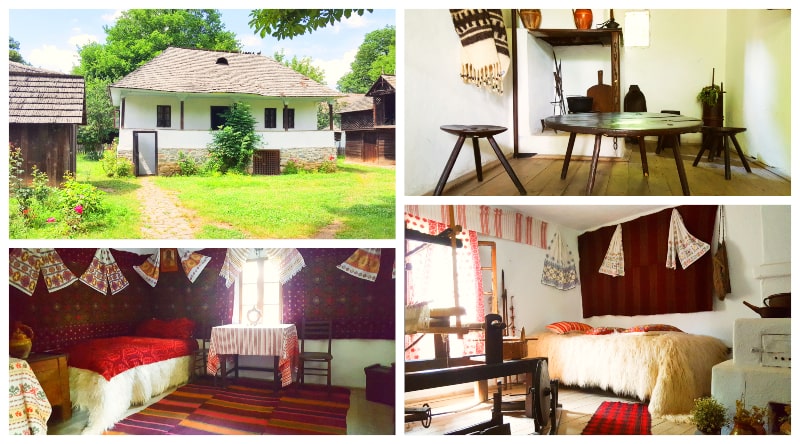 Șurdești household dates from 1797 and shows us a specific way of placement of the buildings named "double court". That means you will see, at the entrance, the barn with stables. The grain store is made of carved beams and has a porch with shaped pillars. It was used for sheltering pigs and poultry, also. The house is placed in the second part of the court. This type of household structure is specific for the villages with a pastoral and agricultural economy. The house plan consists of three rooms: one room at the entrance which is unheated, the living room and the store room. 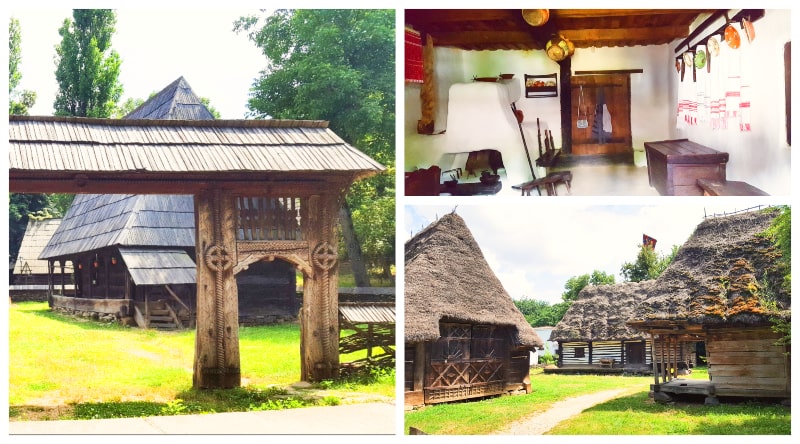 Among the 123 settlements from Village Museum Dimitrie Gusti you will find a house that belonged to a Lipovans family. Lipovans are old rite Russians who arrived in those areas, including Danube Delta, into the 17th century, due to religious schism in the time of Patriarch Nifon. The Lipovans' occupations were agriculture, viticulture and fishing. They had a specialized construction built on stilts over the water, called fishery. The house architecture has paint decorations in vivid colours and the plan of the house includes the guestroom, the first entrance hall, the living room, the second entrance hall and the kitchen. In the courtyard there is a large oven used  as a summer kitchen and behind the house there is a steam bath. The interior is impressive by the oven for sleeping placed in the kitchen, crocheted curtains, old style Russians icons and a lot of other things that you certainly will see during your tour. 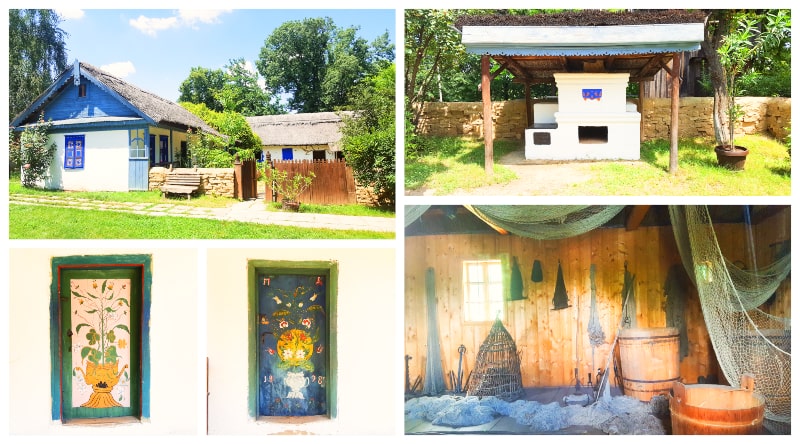 The places of worship have always had a major influence in the life of the Romanian people. Usually, the houses were built around a church and the priest was the counselor of the common man. Wooden churches are the witnesses of old customs. Inside the Village Museum Dimitrie Gusti you will find three wooden churches.

The church dedicated to Saint Nicholas comes from northern Oltenia, Gorj County, and was built in 1773. It is amazing due to its architectural qualities and the painting ensemble that adorns it, being one of the few outside painted wooden churches. Inside the church, you can admire paintings with Christian saints. Outside there are few important paintings like The Doomsday and the Heaven, the Three Prophets (Elijah, David, and Solomon), the founders, the priests, and the laypeople, dressed with clothes of that period. 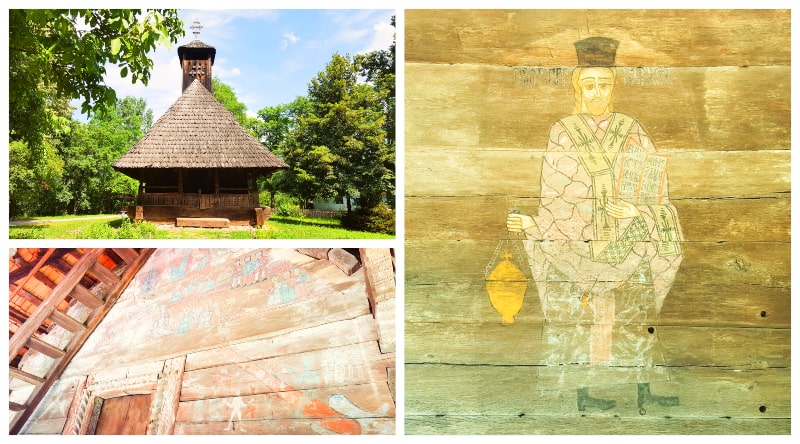 Of course, there are a lot of settlements to see, a lot of history and a lot of traditions inside the Village Museum Dimitrie Gusti. We recommend you book a guided tour in advance for more information.

*Appointment by e-mail [email protected] at least 48 hours in advance.