Located in front of the church Sf Gheorghe-Nou (St George-New), on I.C. Bratianu Boulevard, the Kilometer Zero Monument shows the distance between Bucharest and other cities in Romania. It seems that the origin of this tradition is found in Rome. Here, in 20 b.C, the emperor Cezar Augustus raised in the center of Roman Forum a monument - Milarium Aureum. This monument consisted of a marble pedestal and a column cast in bronze. This monument was considered the reference point from which all distances in the Roman Empire were measured. This is how the famous phrase appeared: "All roads lead to Rome".

Why is Kilometer Zero important for the Romanian History?

During the reign of King Carol I (10th of May 1866 - 27th of September/10th of October 1914), the place from which the distances between Bucharest and the rest of the localities in the country were measured was established by the topographers who drew up the first maps and plans at that time, in front of the church of St. George-New.

View in Google maps
This is because it was considered central, being quite close to the City Hall and because it had the great advantage that in front of this church stopped all the diligences that came to the inn situated in the vicinity.
The monument at Kilometer Zero is a wind rose, between the rays of which are engraved the names of the main Romanian historical provinces: Transylvania, Banat, Bessarabia, Bucovina, Dobrogea, Moldova, Muntenia, and Oltenia. In the center of the rose, the sculptor Constantin Baraschi placed a sphere on the circumference with a belt on which are represented the signs of the zodiac, and on the stone sides of the small basin where the rose is slightly submerged are the names of some Romanian cities and distances. Through the cities that can be read here, there are Chisinau, Orhei, and Tighina, which are currently in the Republic of Moldova, as well as Silistra and Bazargic today Dobrich of Bulgaria, which were part of Greater Romania from 1913 to 1940.
In 1940, the series of territorial concessions from Romania began. As a result of the Vienna Dictate, Northern Transylvania and Maramureş were lost. Following the negotiations in Craiova, part of Southern Romania is lost as well. Following the Moscow ultimatum, Bukovina and Bessarabia are also lost.
Because half of the localities inscribed on the monument were no longer part of Romania and to avoid nationalist outbreaks, the only solution that appeared as a savior in terms of the existence of the monument is to cover the pool with a floor, leaving only the planetary zodiac that marked the point kilometer zero.
Following the events of August 1944, the announcement that the Russian army would "conquer" Bucharest forced the City Hall to take a radical measure: completely cover the pool with earth, remove the stone curbs and remove even the zodiac.
Destroyed during the communist regime, the ensemble was unveiled in 1992 and restored six years later (1998) by a team of specialists led by architect Alexandra Chiliman Juvara.
Hidden behind the tram station, the Kilometer Zero Monument often goes unnoticed. Many times, the locals do not even know how many stories are hidden behind this ensemble. However, we consider that the Zero Kilometer Monument deserves to be admired, especially since it has witnessed so many key historical events in the life of the Romanian people.
After this history lesson, we recommend you a short break. The Old Town is just across the street! 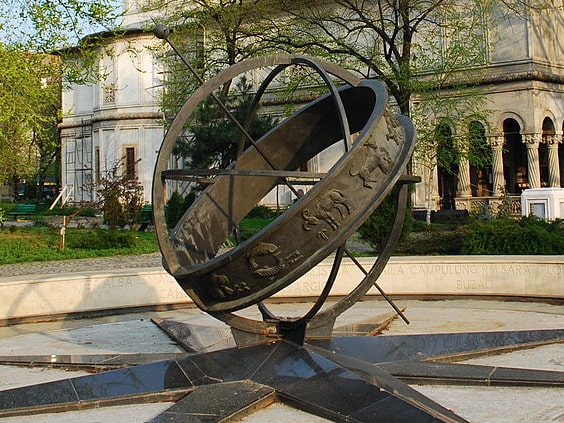