Calea Victoriei is known as an aristocratic street and the most famous street in Bucharest.

The history of this street begins in the 16th century. During that time the street was divided into two smaller streets: the first one ran from the Royal Court to the National Military Circle and the second one was the road of Brasov. During that period of time, the name of the streets was given according to their destination.

During the reign of Constantin Brancoveanu, in the 17th century, the name of the street was changed to Podul Mogosoaiei (Mogosoaia Bridge). It was called so because the road linked the Capital city to the summer residence of the ruler (Mogosoaia Palace) and bridge because the street was the first paved street in Bucharest. Podul Mogoșoaiei was paved with long tree trunks, placed 20-30 cm above the ground. Obviously, it wasn't the best way to pave the street and the old testimonies say that if you were walking in the rain you had all the chances to be stained with mud.

After the Independence War (1877 - 1878), the Mogoșoaiei Bridge became Calea Victoriei (Victory Street). The Romanian Army paraded after winning the independence war on the Mogoșoaiei Bridge and stopped in the Palace Square, where the army was greeted by Prince Carol, the future king of Romania, and the soldiers addressed him: "Prince, we brought you Independence!" At that moment, Carol and the mayor of Bucharest decided to change the name of the street in Calea Victoriei - Victory Street and this is its name to this day!

As you will see during your Calea Victoriei Tour, this is a street with very beautiful buildings. Most of them were built at the end of the 19th century or at the beginning of the 20th century for rich families. Start your tour from Victoriei Square, after your visit to Grigore Antipa Museum. 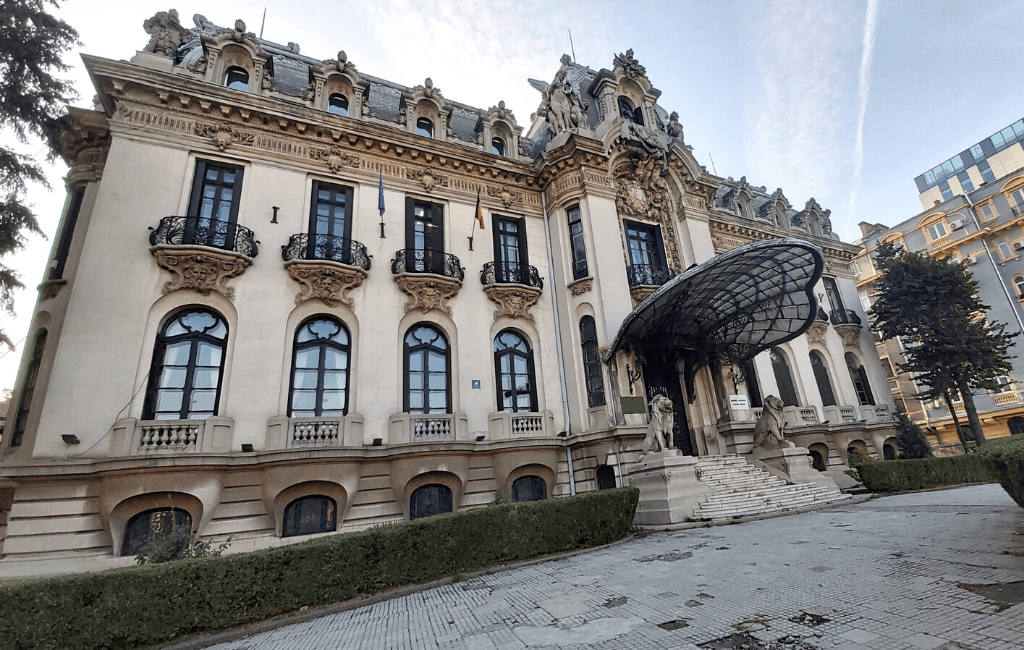 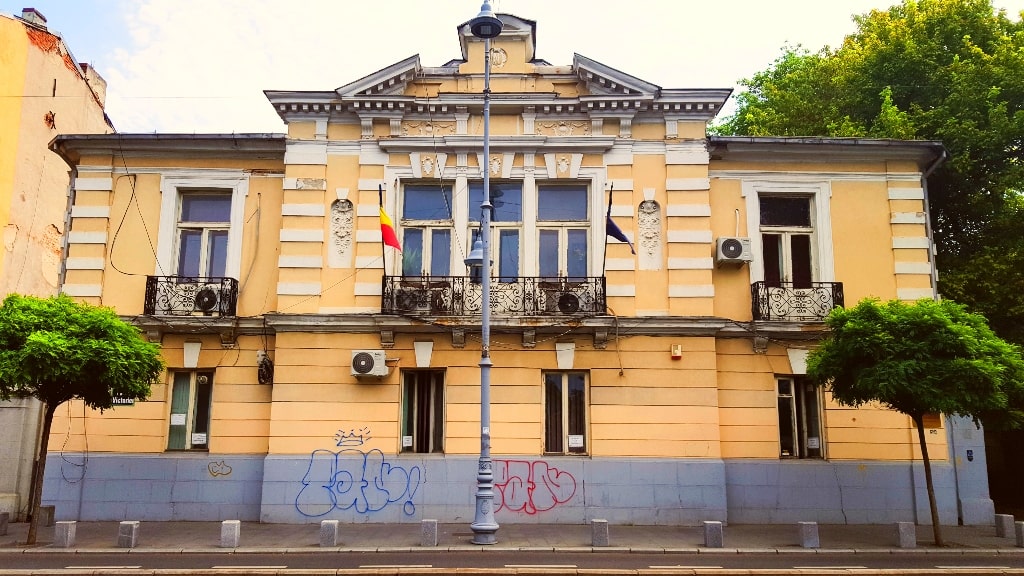 The yellow house that you can see just above the Cantacuzino Palace, on your left side, with flags on the balcony, has some captivating stories which will help you make an idea about Bucharest of those days and why it was known as Little Paris. Two women lived here. The first one, Cleopatra Trubetskoy, used to be the host of the famous pianist Franz Liszt. Franz Liszt was so enchanted by the Romanian people that he composed a Romanian Rhapsody. You can listen below this rhapsody. For a few minutes you can close your eyes and you can transpose yourself into the salons of that era.

After the death of Cleopatra Trubetskoy, the house was bought by a rich landowner for his daughter, Nyka. Nyka remained in history as the most elegant woman of those times. It is said that when she went for a walk, it was mandatory that the visit and the cover of the carriage be matched with her dress, even the horsehair, too. She was so beautiful that she had countless love affairs and she was married three times, which was quite unusual for that time. 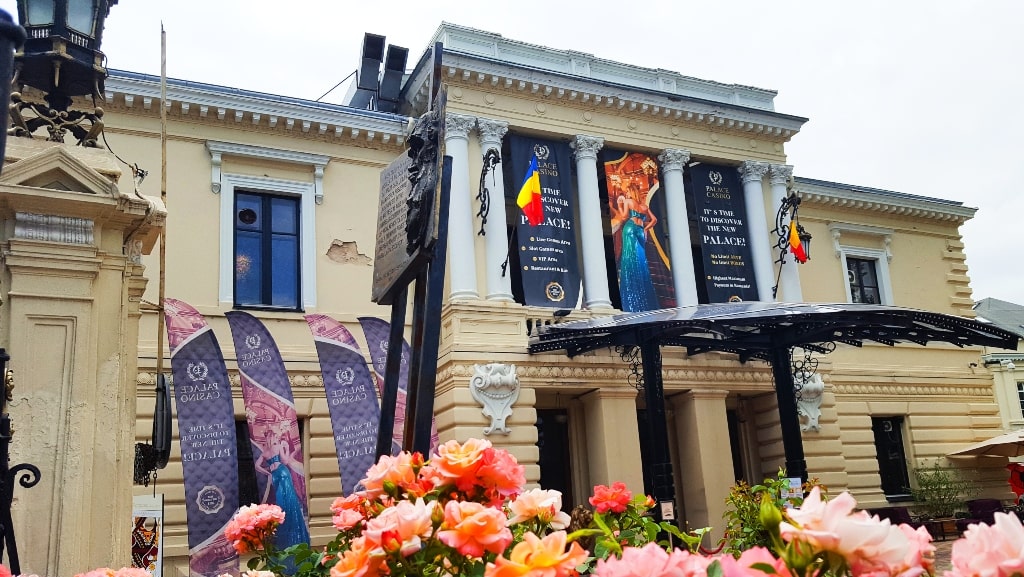 Vernescu House was built in the first part of the 19th century. It was the wedding gift of Filip Lens, a Polish officer, for his wife. Lens Family would live here until the Crimean War (1853-1856). After the death of Filip Lens in 1853, the family sold the property and moved to Poland. Until 1880, when Guta Vernescu bought it, the house remained abandoned. Guta Vernescu, a liberal politician who will become prime minister, was very rich due to his business with the state. He hired the architect Ion Mincu to realize a true palace from the house and the painter Mirea painted the interiors of the rooms. Casa Vernescu became famous through the balls that took place here. Among the important guests who participated in the balls of the Vernescu House was even the great Lev Tolstoi. But there came a time when Vernescu ran out of money. He sold the house to the State and it will host the Council of Ministers in the interwar period, the Command of the Soviet Union in the Second World War and even became a protocol house for guests from the Soviet Union in the 1950s. Today the house is the host of Palace Casino. Whoever wants to get rich now has a chance! But, let's continue our Calea Victoriei Tour! 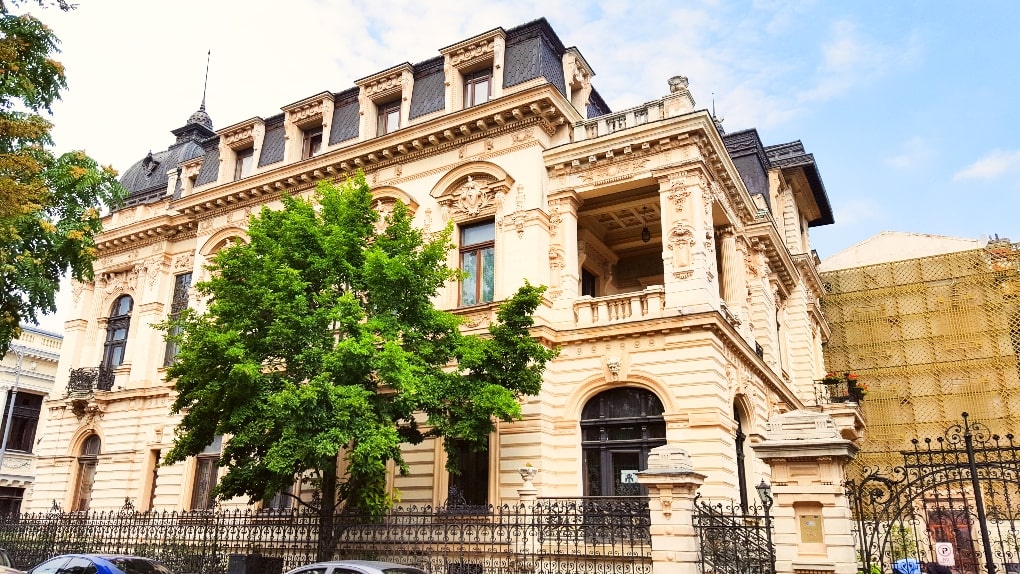 Across the Vernescu House, you will see another famous house, extremely beautiful and well maintained. This house was built in 1884, almost into the same time when the Statue of Liberty was built in the USA. It was built at the demand of Ion Gradisteanu, a politician, for his wife. For this construction, Jules Berthet and Louis Blanc, both French architects, were hired. If you want to admire royal salons, Viennese salons, or Oriental ones, you have to make a reservation for a private event. Till then, you can admire the gorgeous architecture, the stained glass, and the perfect garden. 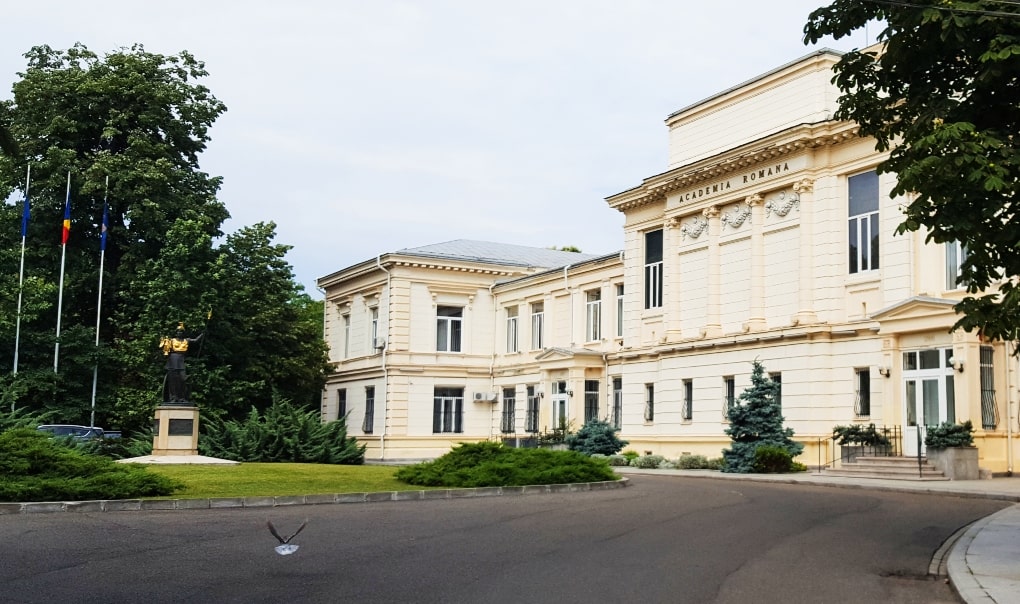 During your Calea Victoriei Tour, you can learn a lot about Romanian history, too. The idea of a Romanian Academy appears in Alexandru Ioan Cuza's time,  the Ruler of the Romanian Principalities. He donated for this goal most of the money, even if the Romanian Academy was built only later, during the reign of Carol I in 1867. It is important to know that, from the beginning, the Romanian Academy has had a clear regulation. There are only 181 academic members and you can become a member only after the age of 75. The first Romanian academician was Ion Heliade Rădulescu. The Library of Romanian Academy has an impressive number of books, many noble families donating their libraries to the institution.

The Museum of Art Collections 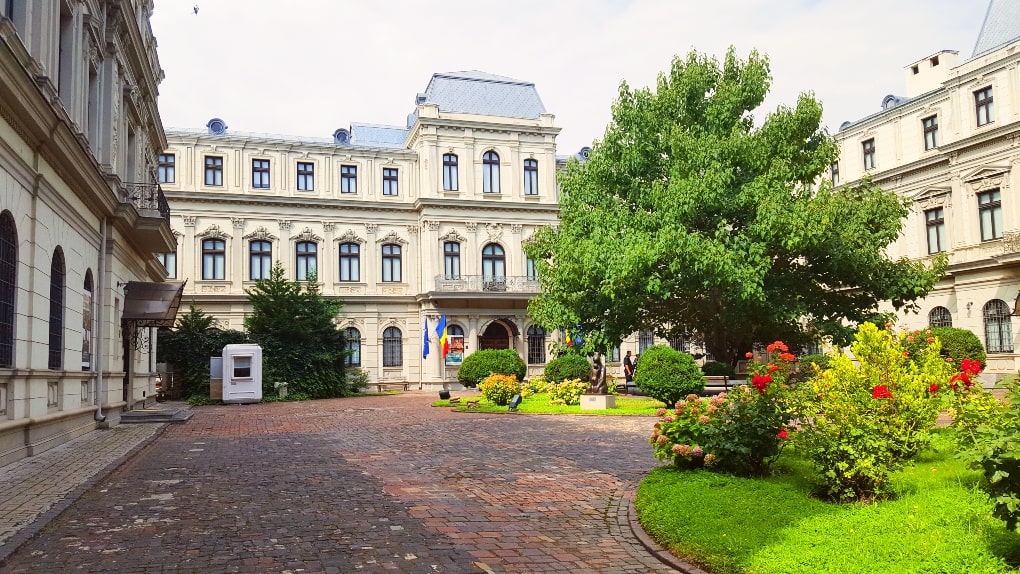 The Museum of Art Collections is hosted in the Romanit Palace. Romanit was a Greek merchant. He came here because the foreigners were exempt from taxes and they quickly integrated into society. When he decided to go back to Greece, he sold his palace to the State. This is the time when the palace is extended in order to host the Ministry of Finance. Starting with communist period, the buildings will be sheltered for many art collections which have been opened to the public since 2013. 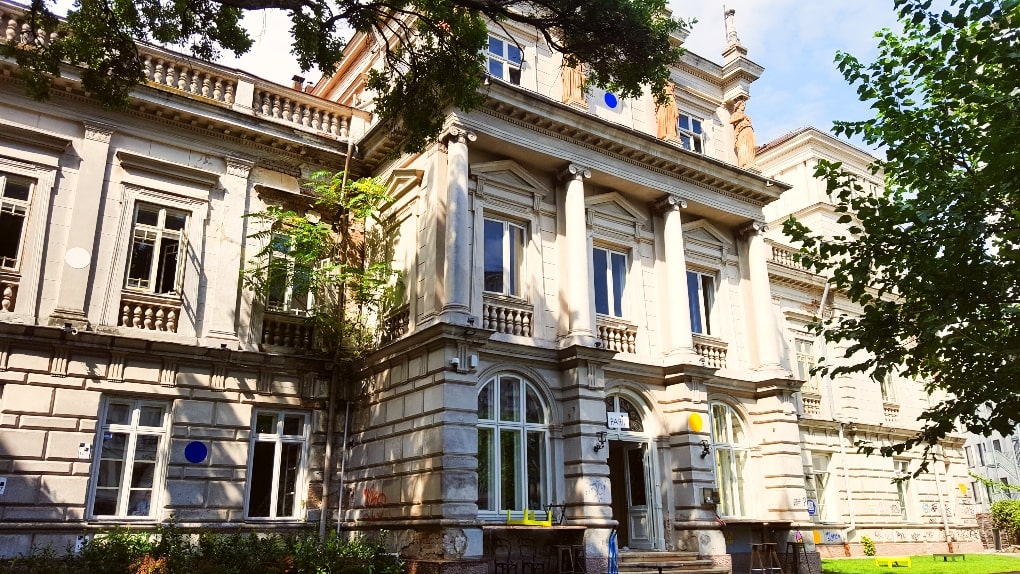 Calea Victoriei Tour is full of surprising buildings. Stirbey Palace is one of the most controversial buildings in Bucharest. The palace was built in 1830 and the land it occupies is huge, being right in the middle of the city on one of the most important roads. This was the reason for lots of demolition plans in order to build skyscrapers or shopping malls, and for protests, too. It survived, though, and today you can admire the caryatids on the facade or take a refreshment in the backyard garden. 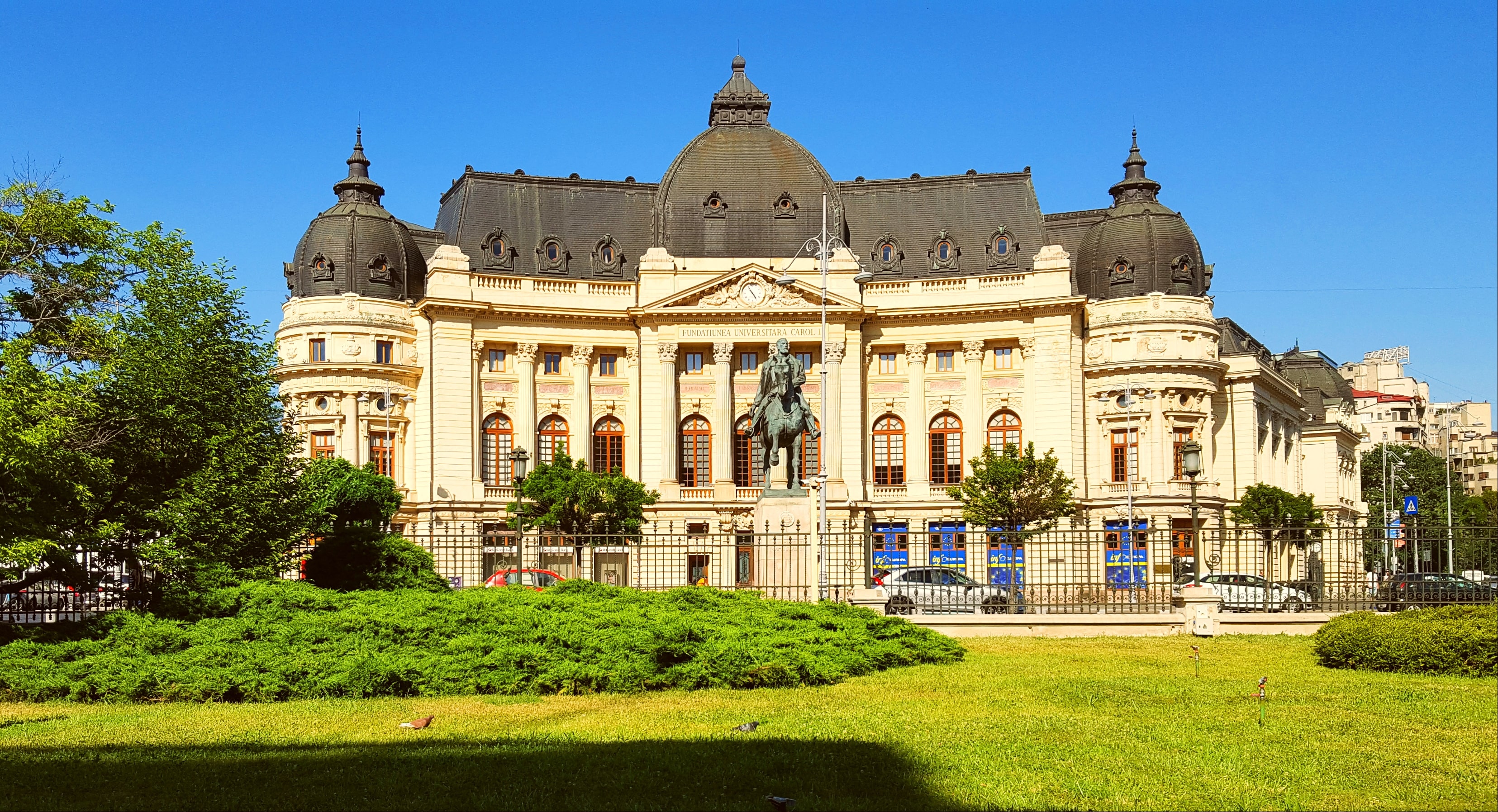 After passing the Hotel Radisson on your right and Hotel Athenee Palace Hilton on your left, a huge market opens in front of you. This is the Revolution Square. Here are some reference buildings and monuments that have hosted important events for Romanians. Among them, you can find the Romanian Athenaeum, Royal Palace, the former Central Committee of the Romanian Communist Party, and so on. You can read about all of them in our dedicated Revolution Square Tour. 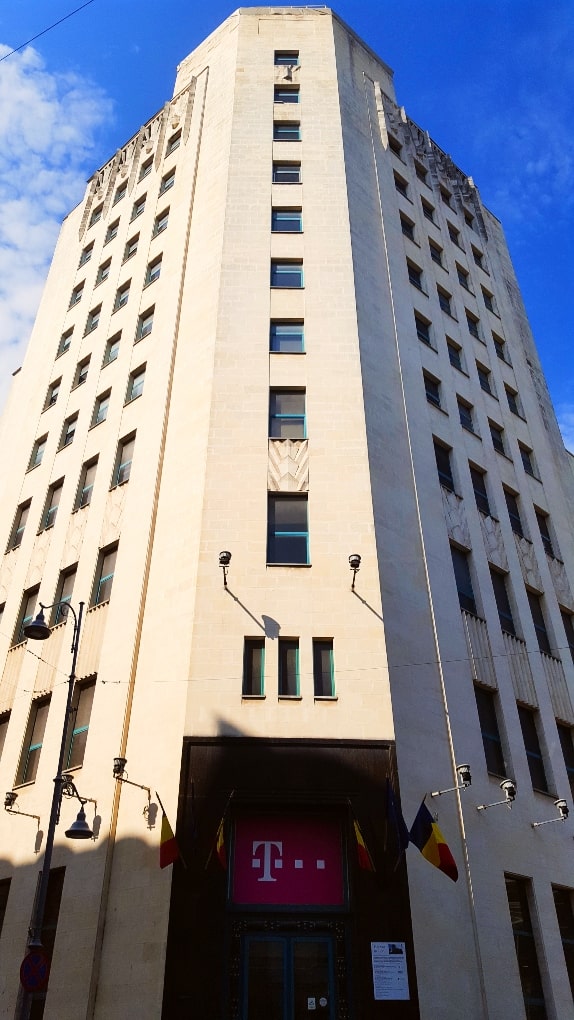 After you pass Revolution Square, Calea Victoriei Tour reserves you a modern surprise of old Bucharest. A controversial building in 1930, The Telephone Palace was sthe first skyscraper in Europe. It was built by two architects from New York together with other Dutch architects. The Telephone Palace was not loved at all by the people of Bucharest. Its style was too simple. In order to show their contempt for the building, the people of Bucharest will refuse for over two years to walk on the sidewalk on which the palace is located. 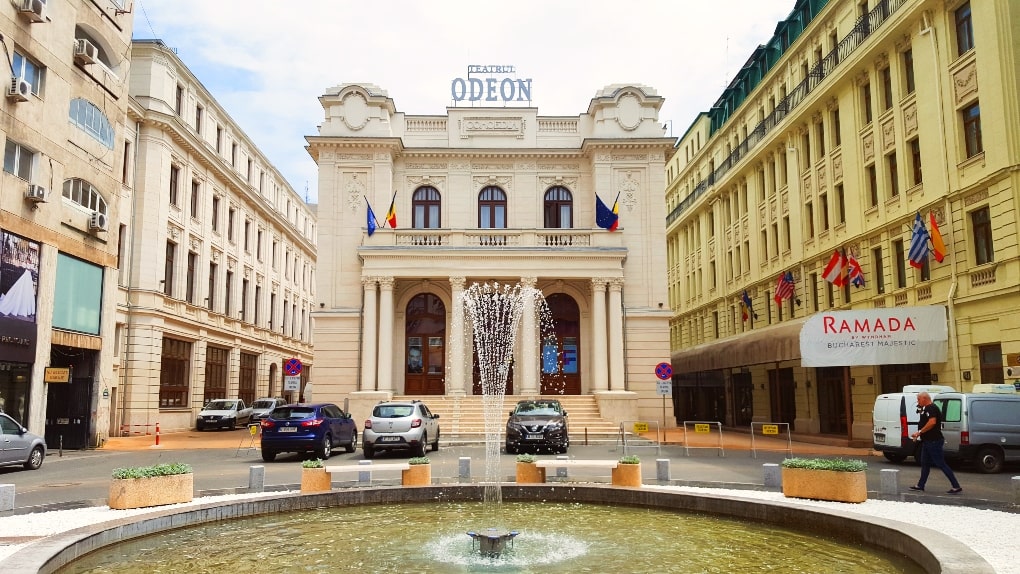 A few meters above the Palace of Phones, on the left, is the Odeon Theater. Take a break from your Calea Victoriei Tour to admire this small building. The building was built at the beginning of the 20th century. It was the conference hall of the Majestic Hotel. Starting with 1989, the building will become a theatre. The building of the Odeon Theatre is unique in Europe as it has a removable ceiling. The roof is in the form of a roll, and during the summer, at the end of the season, each show ends with the "stripping" of the ceiling. There is only a similar building in the world, in Japan. 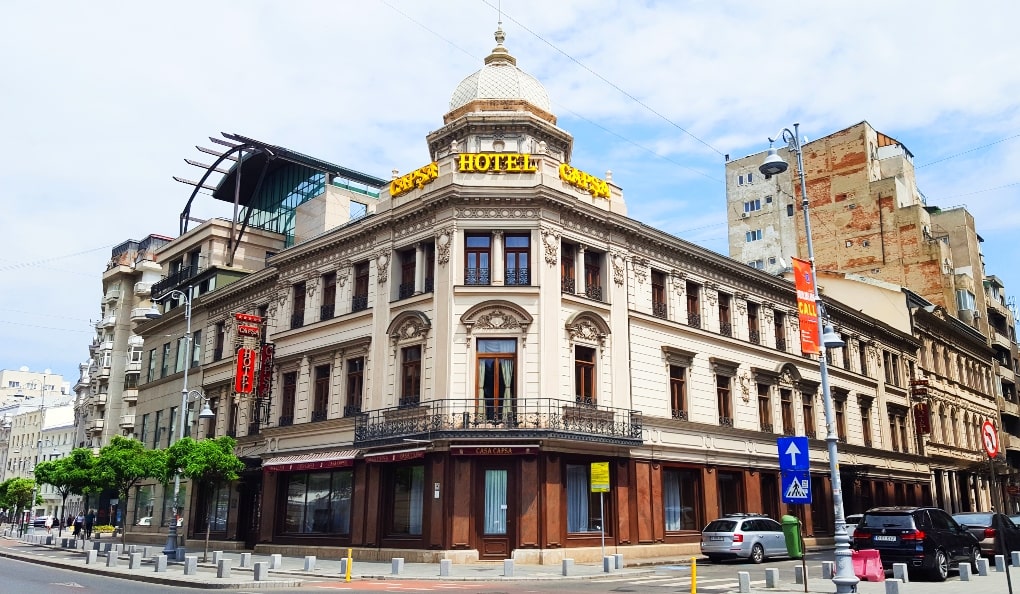 The story of Capsa House started from a simple cafe opened by two brothers in the 19th century. Their cafe will become famous and it will be frequented by the rich people of Bucharest. This was the moment when the two brothers decided to make an inn above the cafe. The chocolate made at Capsa House became famous in Europe due to the royal family and the Government's officials. They, whenever they went on official visits, offered the ladies a box of Capsa chocolates. If you want to feel the taste of that famous chocolate, all you have to do is to enter the hotel and order one. The recipe used at present remained the original one! 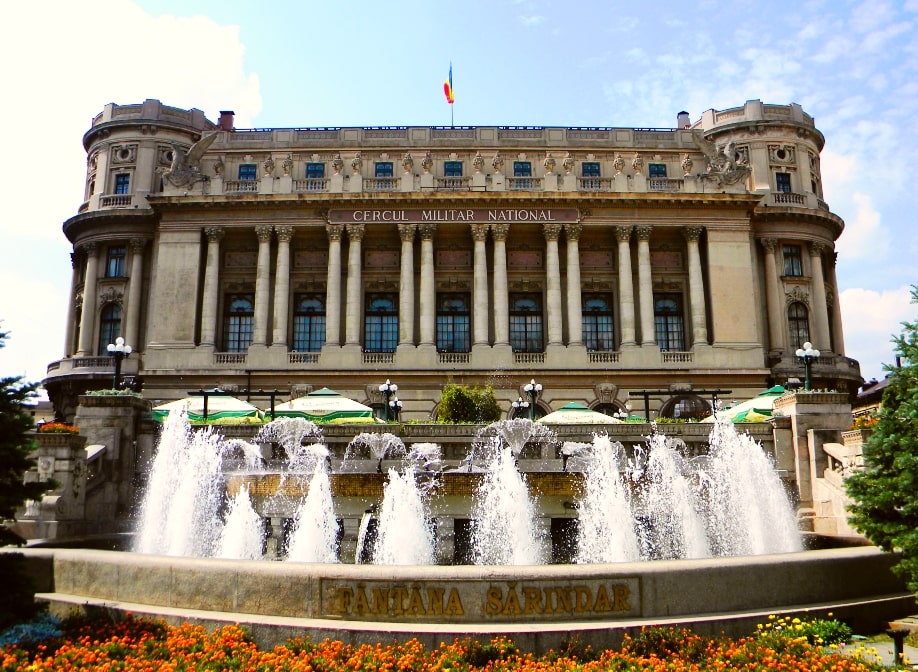 The building that you see today rises on the site of the former Sarindar monastery, commemorated today by the fountain that can be found in front of the building. The construction of the Palace began before World War I and was finished only after the end of the war. For the completion of the building, a lot of officers who survived the war would donate money. In 1922 the palace was inaugurated. Today the National Military Circle is a cultural institution that belongs to Romanian Army and includes a cinema, a theatre, a library, a concert hall, ballrooms, and a restaurant. 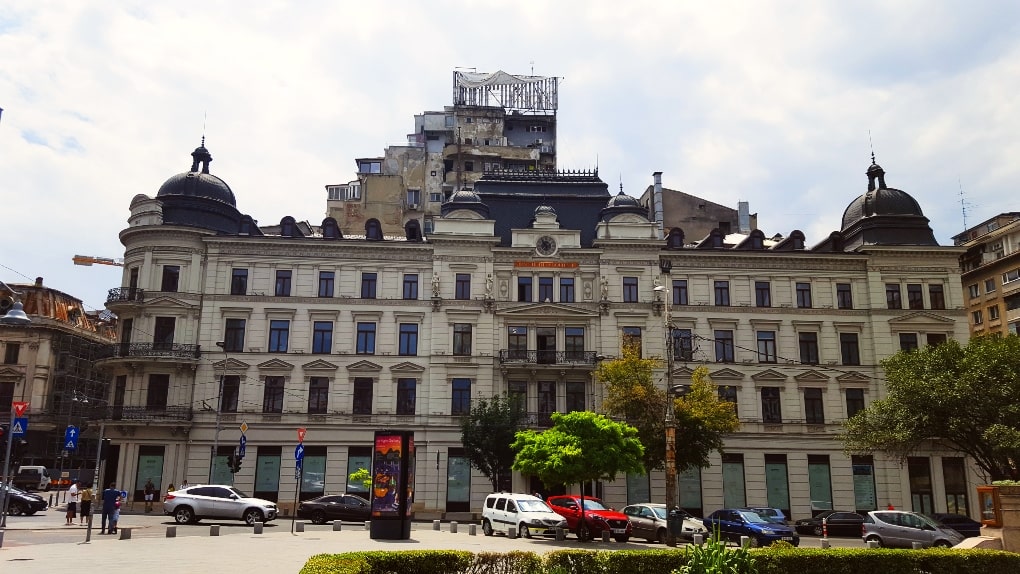 The hotel was built in the 19th century. From the beginning, it was a famous hotel because it was the first hotel in Europe with running water in the rooms. It is said that it was a hotel frequented by spies, a lot of treaties being signed here. 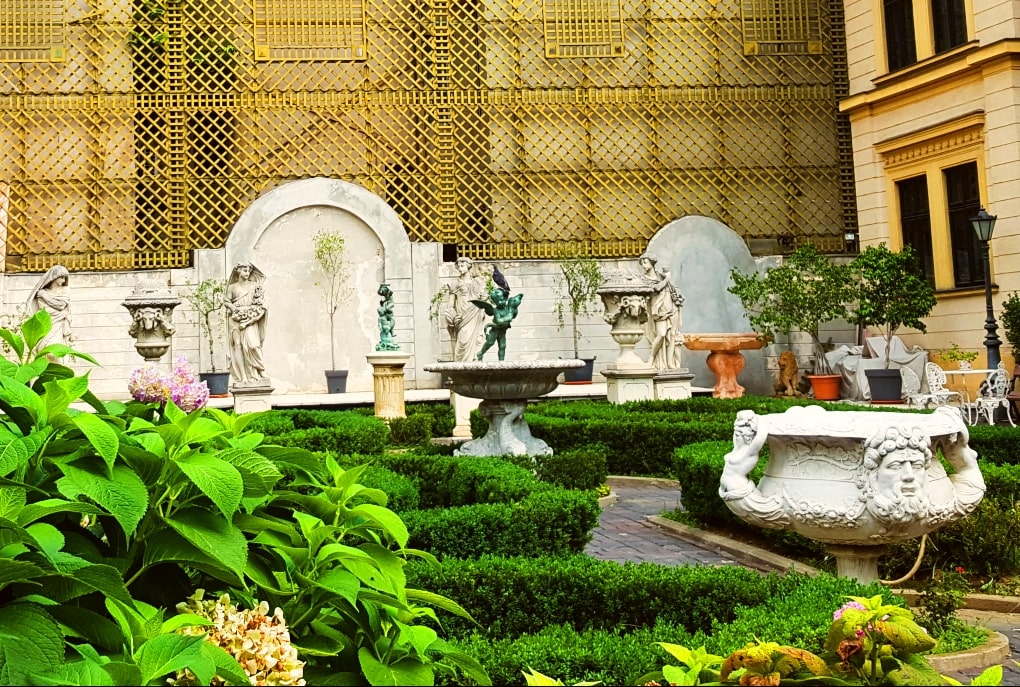 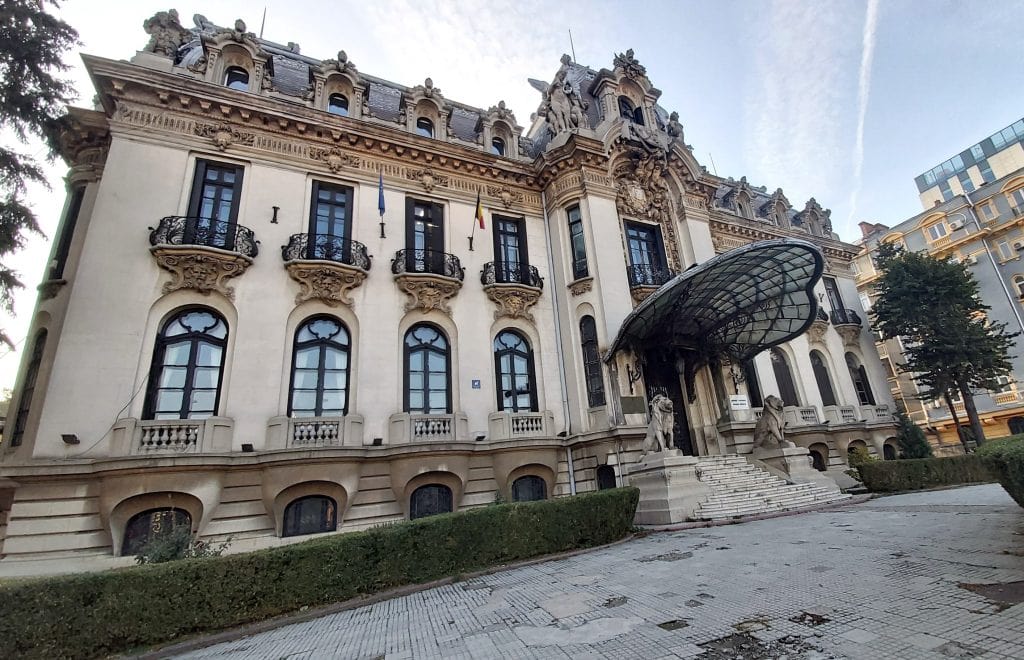